Gebhard Fugel (1863 Ravensburg – 1939 Munich), the artist responsible for the panorama in Altötting, was at the forefront in the renewal of Christian art at the end of the nineteenth century and the beginning of the twentieth century. He painted a large number of murals and altarpieces for churches in Germany, Switzerland, Italy, Austria and the United States, and over 100 paintings illustrating Bible stories. Prints after Fugel’s Bible paintings brought his work to the attention of a wider public.

Fugel began his career with large-sized history paintings of religious subjects. His painting of Christ Healing the Sick (1884/5, Missionshaus Heilig Kreuz, Altötting) attracted attention when exhibited in the Munich Art Union in 1885. The paintings he made during this period were created specifically to be exhibited. They are typical examples of the genre at a moment when history painting was considered to occupy the highest rank in academic art.

In 1893 Fugel co-founded the Deutsche Gesellschaft für Christliche Kunst, an art society which is still active today. From the outset the society, encouraged and driven by the contemporary modern art movement, aimed at high artistic quality and giving personal freedom for artists working in the Church. In 1905 Fugel was awarded the title of professor.

After 1890 Fugel concentrated on church mural painting. Early examples of this work can be found in the pilgrimage church of St Gebhard near Bregenz in Austria (1895/6), and in the city church of Wangen/Allgäu (1899). The panorama in Altötting (1902/3) is today regarded as his most important work. With it Fugel succeeded in adding a new spacial dimension to the genre of religious history painting. Of considerable importance too were his mural paintings in St Josef in Munich (1904-1908) representing the Stations of the Cross. Sadly they were destroyed in World War II.

Gebhard Fugel, The Angel with the Seal of the living God, Book of Revelation (Benedictine Monastery Scheyern)
Gebhard Fugel, Jesus walks on the Water , oil on canvas, c. 1924 (Diözesanmuseum Freising)

In murals depicting the life of St Andrew (Liebfrauenkirche, Ravensburg, 1908/9) Fugel developed a new reduced style of painting which became a feature of his later work. This new style is clearly discernible in his extensive series of Bible story paintings (1908-1932). With them Fugel set a new standard. In 1933 he published twenty-five sketches to illustrate the Book of Revelation, for this adopting a more visionary style. 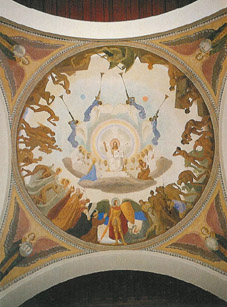